Patrick Chassé, the award-winning landscape architect who designed the White Garden in Lewisboro, N.Y., likes his gardens to have a historical context. So when a homeowner asked him to design a garden for a new Greek Revival-style home set on 45 acres, his first concern was to make sure the house incorporated features that would recall ancient Greece.

The home itself is, in Chassé‘s words «Greece meets New England Barn.» The siding is weathered grey clapboard while the style is a play on a Greek temple. Each aspect of the house looks onto a different garden, each whimsical and endlessly fascinating as the seasons change.

Approaching the house along an unpaved driveway, one can glimpse the building through trees and across ponds. Several large, moss-covered stones lead the visitor through a narrow gap in an evergreen hedge and into a round, paved courtyard. «It’s a theater,» says Chassé. «The visitor is the player.» And the audience is a collection of old busts set in a circle around the courtyard, peeking out from among rhododendron bushes. Having bowed to the busts, the visitor reaches the front door.

«Greek temples were always in forests,» Chassé says, explaining that the large trees surrounding the house have been re-interpreted as a grove. The trees closest to the home’s foundation receive heavy root pruning to prevent damage during construction. 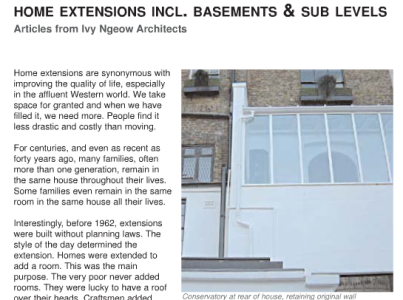 Professional tips from an international UK based RIBA architect.

Over 50 pages of advice and guidance. Very succinct and useful tips.