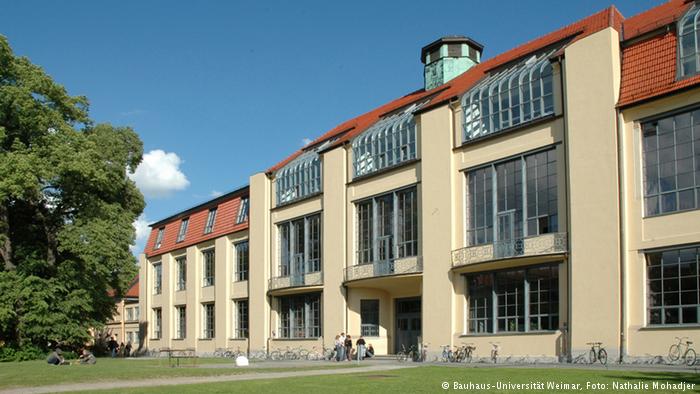 When Klee arrived at the Bauhaus school in Weimar, Germany in 1921 to take up a teaching post as “Meister”, he was already a famous avant-garde artist.

The school, whose motto was “art and technology – a new unity”, was charged with producing a new guild of craftsmen, in the words of founder, architect Walter Gropius.

Socialist in nature, the institute aimed to “raise the arrogant barrier between craftsmen and artists”, according to Gropius.

During the early years of the Bauhaus, an artist was consigned to a craftsman, the idea being that they were two halves of a whole – the former would teach the formal course content, the other the practical.

This is where Klee the artist fitted in, teaching first bookbinding and later taking charge of the stained glass and mural painting workshops.

His new appointment forced him to order his thoughts on the theoretical aspects of creating art.

Prior to joining the Bauhaus, his considerations were of a private nature, contained in his diaries and letters addressed to his wife, Lily, a talented pianist who was frequently away from home on musical tours.

desde Klee and the Bauhaus – swissinfo.

1926: Bauhaus moves from Weimar to Dessau after the Thuringian government cuts its subsidy.

1926: The Klee family move into a “Meisterhaus”, a purpose-built semi-detached house; their neighbour is Russian-born painter Wassily Kandinsky.

1930: The Fine Arts Academy in Düsseldorf offers Klee a post, which he accepts.

1933: The Klee family moves back to Switzerland.

The Bauhaus Academy existed from 1919-33 in Germany and its motto was “art and technology – a new unity”.

Its founder was the architect Walter Gropius, who wanted to produce a new guild of craftsmen, who would “raise the arrogant barrier between craftsmen and artists”.

The Bauhaus had three homes (in the following order): Weimar, Dessau and Berlin.

The downfall of the Bauhaus was due to the rise of National Socialism in Germany.

bauhausnews Klee and the Bauhaus – swissinfo: When Klee arrived at the Bauhaus school in Weimar, Germany in 1921 to take up a t… http://bit.ly/8LC6uI